Soldiers, Sailors and Airmen of the Allied Expeditionary Force!

You are about to embark upon the Great Crusade, toward which we have striven these many months. The eyes of the world are upon you. The hopes and prayers of liberty-loving people everywhere march with you. In company with our brave Allies and brothers-in-arms on other Fronts, you will bring about the destruction of the German war machine, the elimination of Nazi tyranny over the oppressed peoples of Europe, and security for ourselves in a free world.

Your task will not be an easy one. Your enemy is well trained, well equipped and battle hardened. He will fight savagely... Our air offensive has seriously reduced their strength in the air and their capacity to wage war on the ground.

Our Home Fronts have given us a superiority in weapons and munitions of war, and placed at our disposal great reserves of trained fighting men. The tide has turned! The free men of the world marching together to Victory!

I have full confidence in your devotion to duty and skill in battle. We will accept nothing less than full Victory!

Good Luck! And let us all beseech blessing of Almighty God upon this
great and noble undertaking.

It is a sobering thing at times... to remember.

There are fond memories and then there are the other kind. Today, I am reminded that freedom isn’t free and that the sacrifice of others have afforded me privileges AND responsibilities. Twelve years ago, I was sobered to the spiritual battle in which I live… very, very sobered. Since that day, God has taken me into training at various significant times—the kind of training that allows me to wield an authority against an enemy that would rather I not.

For these past several years, the imagery and theater of battle has taken on a new perspective in my heart. It hasn’t inspired me to enlist or go to war… it has equipped me for the war in which I am already a part and the role which is already mine to play. We face an enemy on which Eisenhower’s speech just touches in the hard fought days ahead. Hitler and Nazi Germany, as cruel and sadistic and evil as they were, barely compares with the kingdom of darkness and all that Jesus did and is doing to see captives set free.

On the brink of His ultimate sacrifice, in John 17 we hear/see Jesus's prayer for and over us. Our mission is Intimacy with our King and our cause is His cause—Freedom from the power of the enemy and the lies that so imprison. We invite you to pray this today over your heart and for the hearts of others.

We encourage you to remember... you are in a battle, and the King of kings is coming back. Until He does, stay steadfast to the course, stay intimately close to Him, and love fiercely all He puts in your path.

I’m not asking that you take them out of the world
But that you guard them from the Evil One.
They are no more defined by the world
Than I am defined by the world.
Make them holy—consecrated—with the truth;
Your word is consecrating truth.
In the same way that you gave me a mission in the world,
I give them a mission in the world.
I’m consecrating myself for their sakes
So they’ll be truth-consecrated in their mission.
I’m praying not only for them
But also for those who will believe in me
Because of them and their witness about me.
The goal is for all of them to become one heart and mind—
Just as you, Father, are in me and I in you,
So they might be one heart and mind with us.
Then the world might believe that you, in fact, sent me.
The same glory you gave me, I gave them,
So they’ll be as unified and together as we are—
I in them and you in me.
Then they’ll be mature in this oneness,
And give the godless world evidence
That you’ve sent me and loved them
In the same way you’ve loved me. 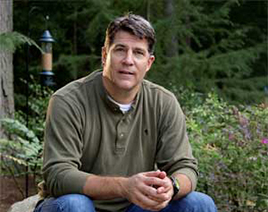 Michael Thompson, author of Search and Rescue and The Heart of a Warrior, is a teacher, mentor, and guide for the hearts of men and women. He and his wife Robin are the founders and directors of Zoweh Ministries in the Raleigh, Durham and Chapel Hill area of North Carolina. Zoweh functions as both a Medic Team and an Outpost to help people experience intimacy, oneness and connectedness with God and with others.

Michael and Robin have been married since 1990. They have three daughters: Ashley, Hannah, and Abbey, and they live in a redemptive community of friends and allies who work together to experience Life together and offer Life to all who God brings across their path.