How many men’s groups do you know of where you would say, “Dang!!!! They are making a difference, and I gotta be a part of that!”

There is a great loss of heart in the hearts of all men. Going after the hearts of men, seeing them healed, trained, free and wholehearted, then turned loose back into a landscape of spiritual battle is not for the faint of heart. It takes courage. It takes real intimacy with the Father to sustain you during the fight and to fill you on your masculine journey. It also takes intimacy with your fellow man - loving God and loving others!

Most men’s groups fail. Let that set in for a second.

Fewer than 10% of U.S. churches are able to establish or maintain a vibrant men’s ministry.

Whether you are in your backyard, around the board room table, or even in your church, men’s groups are constantly starting and stopping. There’s so much wreckage in the men’s ministry world.

I get a front row seat as the Director for Zoweh Allies. I like to say that I get to walk in many kingdoms with many kings! They relay a lot of valuable information for us about how hard it is to have a vibrant men’s group. But I believe we have a simple answer.

1. Groups that fail or get stuck don’t make it about relationship first.

Knowing and being known - your story, who you are - and redemptive friendships, first with God then with your brothers, has to be the cornerstone of your men’s group. Men need a team or brotherhood and a trusted place they can share their hearts and know each other and God better, and grow in who our Heavenly Dad created us to be: Beloved Sons.

2. Groups that fail or get stuck become “performance driven.”

How many books can we read/porches can we fix/men can we bring? But this often misses the heart. Men need to move and do things but they need more than a project or just another book to read. They need consistency - putting your time in. Living life together will create an environment where God shows up and shows out. Go read Acts 2:42-47. The following phrases jump out to me:

Read it - just in those few verses there are fourteen plural pronouns. I think the consistency of being together is pretty important.

3. Groups that fail or get stuck don’t have settled leaders endeavoring to live as beloved sons that produce safe environments free of shame and guilt.

Men need settled hearts and eyes on their lives, someone they can trust and be loved by - a good King. As John Eldredge says about the Charles Schreyvogel painting My Bunkie, “You can’t be the man on the horse until you’ve been in the man in the mud!” 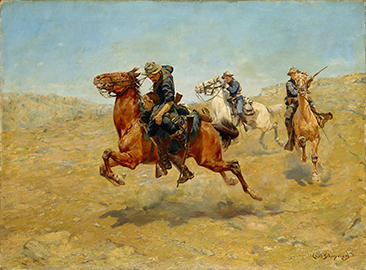 4. Groups that fail or get stuck don’t make the environment/culture welcoming and adventurous, treating men like men and giving them space and honor.

Environments that are stale and institutional loose men in droves. Men need to be treated like men,­ with a deep honor to who they are, with a common mission and adventure where they can be tested, risk safely, found true and work together to grow deeper in their friendships with God and each other.

For better or worse, men do what they’re trained to do. I know that men need good resources like The Heart of a Warrior, Wild at Heart, and many other amazing books . As Yoda said in Star Wars, “You must unlearn what you have learned,” and walk into the life of the heart as a beloved son! Tradition isn’t always bad. We have Christmas Tree bonfires every January and they are amazing! But when you are unwilling to create a battle plan, “What is the ________________ (your church’s way), as God designed it, partnering with the heart of God for the men in your area, then there are problems.

Practicing his presence, worshiping and praying, and listening to his voice is our lifeblood as we engage with other men and over time, creating a redemptive brotherhood of men. Together we can advance the kingdom by loving God and loving others. This love rescues the brokenhearted, and plant seeds of life, and freedom.

Want your men’s group not to be stuck or fail? Along with prayer and intimacy with God and others, building friendships and sustaining desire, hope and motivation for the long term is the name of the game.

The relationships with other men and the environments you create where men can hear another man’s story and invite other men to know his own are what Redemptive Friendships are all about. It takes time, but it is worth it!

There is a reason good friends are hard to find. They aren’t randomly found … friendship is forged over time. Redemptive Friendship is the result of good men committed to entering into each other’s story, carrying one another’s burdens and celebrating each other’s comeback.

We are here to help!

We deeply believe this is the good God is up to in any man’s life who is willing to take the courageous steps toward freedom that is his in, through, and from Christ.  It was C.S. Lewis who wrote in Mere Christianity,

God can show Himself as He really is only to real men.   And that means not simply to men who are individually good, but to men who are united together in a body, loving one another, helping one another, showing Him to one another.  For that is what God meant humanity to be like… Christian brotherhood is, so to speak, the technical equipment. – CS Lewis

The mission of Zoweh Allies is to rescue hearts and advance the Kingdom by connecting kindred hearts and inviting one another into deeper intimacy, oneness, and connectedness with God and each other. Is your heart drawn to this mission?  We’d love to hear from you. Email us at allies@zoweh.org.